Oscar Bridges: Being a boy in dance

This week, we were graced with future musical theatre ROYALTY… sixteen year old Oscar Bridges. I might be twenty-four years older than him, but I have looked up to him with twinkle eyes since he was just four. He’s one of those people who was born for stardom and I can guarantee he’ll be high kicking his way to Broadway and the West End in no time!

So, while he’s still an Adelaide treasure and willing to hang out with us, I thought we’d share his story…

Oscar, you were four when I first met you and your mum said to me, “He’s going to be on stage one day”. Have you always known that you were destined for the stage?

I have always known that I wanted to be on stage and performing! When I was three, my grandparents bought me the DVD of the Broadway pro-shot, Cats the musical. I watched it every day and fell in love with singing and dancing. From there, I did my first show at seven-years-old, playing the seahorse in The Little Mermaid, where I really discovered my passion for musical theatre. However, it didn’t strike me that I could do it for a living until I grew up a little and realised that it is actually a profession.

Alrighty, time to show off! Tell us about the parts you’ve played and which musicals you’ve been in?

Over my nine years of being in musical theatre, I’ve been a part of around 30 musicals. It makes me tired just thinking about it! Back to the story, I was cast in my first professional show at 10, playing the role of Kurt Von Trapp in the Adelaide leg of the Australian tour of The Sound of Music. Just to drop some names, Cameron Daddo played my dad and Marina Prior was my stepmum, the Baroness Schraeder.

It was so fascinating at 10 to be surrounded by a bunch of likeminded individuals and getting to play for work. I think one of the most important lessons that I took away from this show was to always do what you love and you’ll never work a day in your life. I don’t think I realised the extent of how lucky I was to have taken a whole term from school for the experience of a lifetime! I know my parents were not feeling the same as they had to council a 10-year-old on how to control his nerves for performing in a professional show for 2,000 people a night. No pressure. I’m sure that’s what every parent must go through!

Well, I can tell you that on opening night, I was driving into The Festival Theatre when I asked my mum what I should do If I needed to throw up on stage? To which she replied something along the lines of, “I don’t have a clue”. But the show went fine and I didn’t throw up, instead I had my shoe slip off marching down the stairs and I dropped the wedding ring.

Other musicals that I have been in recently include Charlie and the Chocolate Factory, as Willy Wonka; Les Miserable, as Marius; Mamma Mia, as Sam; and Matilda, as the evil principal, Miss Trunchbull. Let me tell you, walking around the school courtyard as a woman in a fat suit and transforming stage makeup was quite the experience and tests your self-confidence.  So, if you ever get the chance to do so, I recommend. 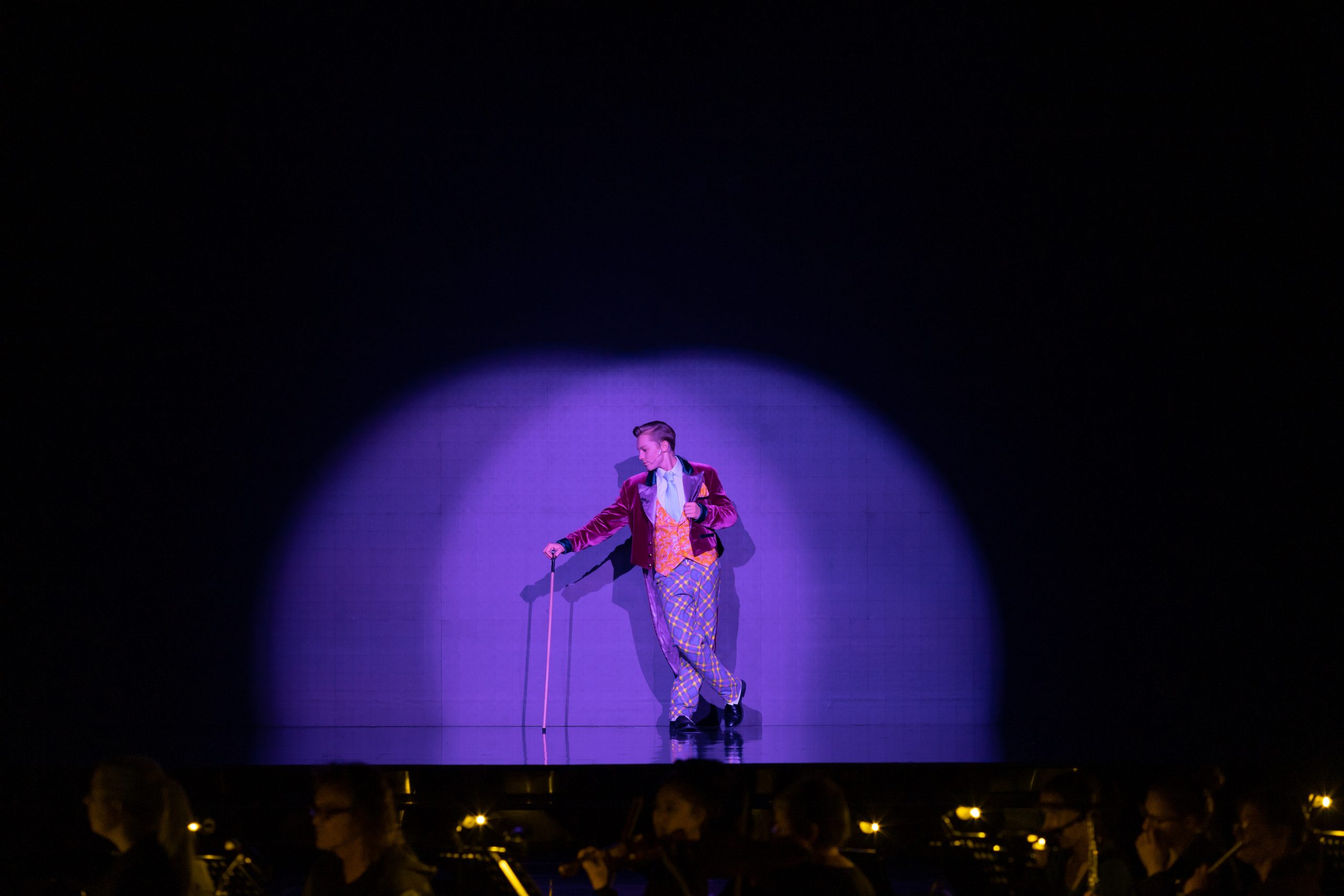 Oscar Bridges as Willy Wonka in Charlie and the Chocolate Factory

We often call you the next Hugh Jackman. Is there anyone you aspire to?

I honestly aspire to be like Hugh! His ability to be diverse in playing roles and doing movies, Broadway and a few casual tours is amazing. I also aspire to have his humility as I always hear how respectful he is of his cast and crew. Also, who doesn’t want to be as rich and famous has Hugh Jackman?

Men in dance — it’s a small and tricky world. How have you found it?

Being that I started dance a lot later than most of my friends (commonly around two), and I didn’t start until I was around nine, I’ve found the dance community to be really supportive and encouraging of my passions. However, the negative side of being a boy in dance is some of the support from the outside world. Most people are really supporting of my career, however there is that small group, specifically older men, who don’t really understand.

An example was when I was at a dinner the other day and a man was talking to me and started off the conversation with, “So how’s the footy going?”. When I was like, “Umm, it’s not,” well, he was shocked to think that I was the soccer type. And I was like, “Oh no, I’m actually a dancer in musical theatre”. There is something quite powerful about being able to say you’re a male dancer as it can feel like a subtle mic drop, a little flex on everyone. Back to the story, this guy was like, “Oh…ok,” but it started a really great talk about dance and also, I got an education on the rules of footy, which was insightful to the game I was about to… endure… I mean watch!

But most of all, being one of two boys in my dance school has taught me much resilience and confidence about going against the grain and learning to be a role model for others who would like to start. I actually did my research project this year on Boys in dance and my research suggested that the cause of bullying and harassment is through a lack of understanding.

Look at the Lara Spencer incident on GMA where she shamed Prince George for starting ballet. This came from a lack of knowledge on the bravery that it takes to be a boy in dance. I concluded through my research that there needs to be more representation in the media about men in dance and performing arts to teach children from a young and impressionable age that performing arts is for everyone. You’ve sung at some massive state events. Do you get nervous and how do you combat that?

Before events, it can depend on if I’m nervous or not. An example is if I were to sing the anthem at the test cricket — of course you would be a little nervous performing in front of millions of people. Because I have been fortunate enough to do the anthem a lot, I sort of go into an autopilot mode where my body just remembers how to do it and I sort of watch along for the ride. However, if there are variables that could cause things to go wrong (maybe a jet flying over my head perfectly timed at the end while singing a cappella), then I get very nervous and stress out way too much. But over time, it always gets easier because you gain confidence and experience, and you can begin to trust yourself and your work. What’s your message for boys who want to get into dance but are worried they might get teased?

My message is just do it and be confident in yourself and your decisions! It’s so easy to fall into the trap of being like everyone else and not put yourself in uncomfortable situations, but it is so worth all the hard work. I know there have been many times where I wanted to give up and not dance anymore so that I don’t have to face people at school, however, no one is worth your time if they can’t support you.

Having something to work towards in life is the best thing for your wellbeing and productivity. If you don’t have something you’re passionate about then it can be dangerous to fall into a dark hole of feeling unmotivated and losing interest in important things like school. Ultimately, there is no solution to bullies, but the best you can do is surround yourself with people who care about you and will listen. But make sure you start dance if you want to because you don’t want to grow up and regret that you didn’t.

Like Hugh, I think it would be amazing to be a part of a movie or TV show (this is me manifesting to the universe), because I feel like it would teach me so much about performing and acting. But overall, I would be happy to take anything that comes my way… so, if you’re a producer and have a role for me, give me a call, thanks!