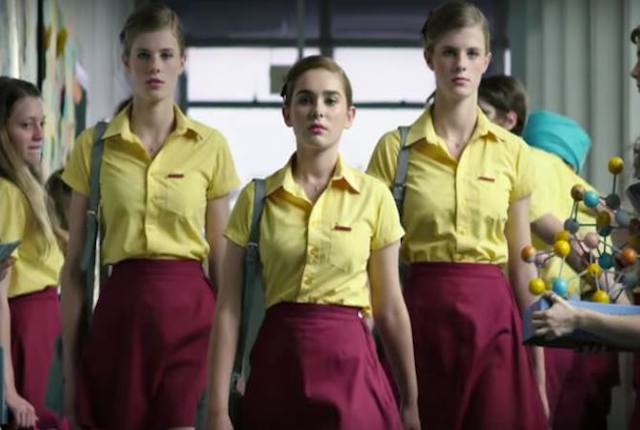 The Adelaide Film Festival has started and I can’t contain my excitement. I am a huge cinephile. I’ve got my tickets to see the World Premiere of Girl Asleep based on the critically acclaimed production by Adelaide’s own Windmill Theatre. I’ve heard Girl Asleep is a journey into the absurd, scary and beautiful heart of the teenage mind – I’m so excited!!

The 11th Adelaide Film Festival will take over locations across Adelaide from October 15 – 25th. For all my fellow screen lovers there is an eclectic mix of documentaries, fiction, short films, talks and family and free events. There’s also a one-night-only reunion of Festival ambassadors where At The Movies duo Margaret and David will host the Ultimate Quiz night! I mention this because I don’t have tickets and am hoping Margaret and David will invite me simply because they love my company – not because I’m a huge stalker fan.

Adelaide Film Festival is showing more than 180 Australian and international films. Including 24 films made right here in South Australia. That got me thinking about some* of my favourite movies that feature Adelaide and South Australian locations, so I put together ‘A not quite comprehensive guide to some* of SA’s films’. Rolls right off the tongue…

*because there is loads more that don’t fit in one blog but my OCD inner voice is telling me to do the whole lot. Watch my Instagram to see if I can do it ALL!!

The Adventures of Priscilla, Queen of the Desert

“A cock in a frock on a rock” – how could you not love this movie? I’m a huge fan of Memento and Animal Kingdom but this is where Guy Pearce truly showcases his acting. Priscilla is hilarious and heartfelt; it’s one of my all-time Australian favourites and should actually be integrated into all Australian citizenship ceremonies.

Filmed almost entirely in South Australia this movie came out when I was living in Mount Gambier with a boyfriend in Adelaide so I was making regular 4-5 hour road trips in the dark alone. No-one needs their familiar landscape corrupted by a demented Playschool presenter. Despite this, I am forever grateful for this movie adding the phrase “Head on a Sick” into my banter, even if it also added stains in my undies.

Whilst Wolf Creek is my favourite Australian horror movie – Snowtown is the most terrifying on my list because it’s literally a little too close to home. The Director found his actors in Davoren Park at the local shops. The horror is not a man in a mask – it’s the ones you sit next to at the pub and scary is the very real decay of the suburbs on the edge of Adelaide. Snowtown is terrifying because it reminds us that mental illness, paedophilia, poverty and violence is lurking in our city’s cracks and finding its way into some unfortunate people’s lives.

Filmed in Adelaide once a week, every week for a year. 52 Tuesdays manages to capture the intensely curious, messy awakening of that transformative age from teen to adult. It shows how important friends become at that age and the transitions people make – including the change from idolising your parents as a child to seeing their flaws exposed.  You can also catch the star, Tilda Cobham-Hervey in an Adelaide Film Festival special event The Film You Wrote, a multi-platform experiment that asked the audience to pick details for a film that will premiere at Made In SA.

Adelaide based director Rolf de Heer’s masterpiece. An arthouse cult classic. It’s the disturbingly comedic story of a son, his mum and his clingwrapped cat. Bad Boy Bubby is back, playing in its spiritual home Port Adelaide during this year’s Adelaide Film Festival. This special event has the audience wearing audio headsets, literally plugged into actor Nick Hope’s experience through binaural sound to give the perception of you actually being in the room with Bubby. That’s some intense sound- “great big whoppers” of sound.

Long before Jim Jeffries was questioning attitudes towards people with a disability through comedy, this little gem was breaking its own ground. Filmed at Escourt House – the beautiful estate overlooking the sand dunes at Tennyson. Struck by Lightning stars Gary MacDonald in a stand out performance alongside my sister (we will never forget, Nicole) and a group of workers with mental impairment, all who deliver in heartfelt and hilarious scenes in a story of triumph over adversity. Ok, so my sister just runs past the screen, but it still had us wear out the VHS tape from Videola back in the 90s.

As a woman who can’t switch her overactive imagination off when it starts up at 3am and a mum of children who don’t sleep, The Babadook was a bit (actually a lot) alarming. Suburban Adelaide is filmed with a pantone perfect palette of shadowy greys, blues and blacks.  Oh Adelaide, why do you have to be so beautiful yet so fucking creepy?!! The strong performances, perfectly timed soundtrack and sublime aesthetics heighten the very unusual plot. I give it 5 pairs of wet knickers!

My personal favourite in the Mad Max series because Tina Turner is in charge of the end of the world wearing a mesh dress and killer heels. Every time I put my twins in a playpen I can’t help but utter, “two babies enter, baby leaves”.

In 1985 Back to the Future was blowing our minds with time travel in a DeLorean. Same year another time travel movie was filmed right here. While set in Sydney it was actually filmed in Port Adelaide and colonial times were recreated in Hendon, even with the rapey men and rats. Some of the more climatic scenes feature old fashioned rooftop parkour, a brothel bust-up, an actual trouser snake and so. much. Rad. 80’s. synth. Moral of the story- beware of buying vintage dresses, you may end up back in time with a father who suffers from PTSD, a sister with rage issues and a psychic grandmother. Loved it as a kid but it’s no BMX Bandits.

The Boys are Back

The golden rolling hills, vineyards and coast of the Fleurieu Peninsula set to a perfectly fitting soundtrack of Sigur Ros is beautiful – which makes sense since that is where director Scott Hicks has made his home. I didn’t watch this when it came out because it seemed like one of those cliché tearjerker movies. It’s not. Hicks lets the story unfold naturally, and even unravel at times, which is fitting for what is based on a true story. The two young actors are excellent and let’s be honest, watching Clive Owen for 104 minutes is not hard work. The world premiere of Hicks new movie, Highly Strung, is featured in the Adelaide Film Festival.

And you can’t mention Scott Hicks without mentioning his multi-award winning movie Shine. Geoffrey Rush in his Oscar winning performance as the pianist David Helfgott. Noah Taylor, who is also excellent as the younger David. Another film based on a true story account. Helfgott was a child prodigy who became a genius musician despite mental illness and institutionalisation – a compelling movie. Watch it or watch it again.

Two of my biggest fears come directly from watching movies with my older brothers when I wasn’t allowed. Both involve water, which is unfortunate because I grew up between the beach and the lake. Thankfully Blobs that suck your face off on pontoons don’t exist; however, Rodney Foxes footage of great white sharks filmed in SA waters was real. REAL!

This sci-fi has some great characters amongst the gory scenes. Coober Pedy looks so amazing Vin Diesel had to get his eyes surgically enhanced. Understandably the locals in Coober Pedy live underground. This is probably because man eating aliens live there. The Crew left their ship there but it’s not flying these days.

Reviews with spoilers suck so do reviews that tell you nothing about a film but some movies are better if you know little about them so I’ll tell you a story about one of the stars, Gary Sweet instead.

One day I was waiting for a friend on King William Road. I saw a man walking towards me in nothing but dick bathers. It was not that hot so I had a giggle and texted my friend. I looked up again and realised it was actually Gary Sweet, and they were not dick bathers – just jocks. Tuesday. Mid-morning. On King William Road. In jocks. We did the head nod as he passed and I’ve been telling the story ever since. He is equally as memorable, and the movie as surprising and disturbing as that incident.

The King is Dead

Dark, unassumingly funny and a plotline that keeps you invested from beginning to end. Set in a suburban Adelaide street, the locations and characters are instantly relatable, sometimes uncomfortably so. The Australian Symphony Orchestra provides an upbeat jazzy bigband soundtrack juxtaposed with the hilarious rap track used – I think penned by Director Rolf De Heer. The King is Dead really made me cringe and laugh- one of my favourite ways to laugh.

December Boys follows four boys from an orphanage in the unmistakable red dust of the outback to the picturesque sandy beaches and clear water of Kangaroo Island for a summer holiday. Who knew a story about orphans and a priest on holiday could be so sweet. The highlight of the movie for me is the stunning coast, despite Harry Potter Daniel Radcliffe getting it on with Teresa Palmer at the Remarkable Rocks. Ironically this story about orphans is one to watch with your Mum or Dad.