By Amanda – On The Chopping Board OTCB was invited for dinner at Isaac’s Kitchen with all food and beverages provided — I’m not going to lie, we were excited! Turning up to Isaac’s Kitchen I (Amanda) didn’t really know what to expect as it is situated at the end of a block of shops on a busy main road with a butcher counter to one side. We are informed later that Isaac’s also trades as a butcher but they are looking to change this part of the space to a private function area.

The small dining room is presented in a lovely clean, modern and minimalistic manner. We are seated promptly and before we have had a chance to fill our glasses with house water flavoured with cucumber, mint and lemon the food begins to appear. The Fattoush salad consisting of thinly sliced lettuce, tomato, cucumber, shallots and crispy fried pieces of Lebanese bread was refreshing but we thought the addition of what tasted like balsamic vinegar detracted from the sumac spices. We would have preferred the traditional dressing of olive oil and lemon so we could taste a lot more of the sumac. 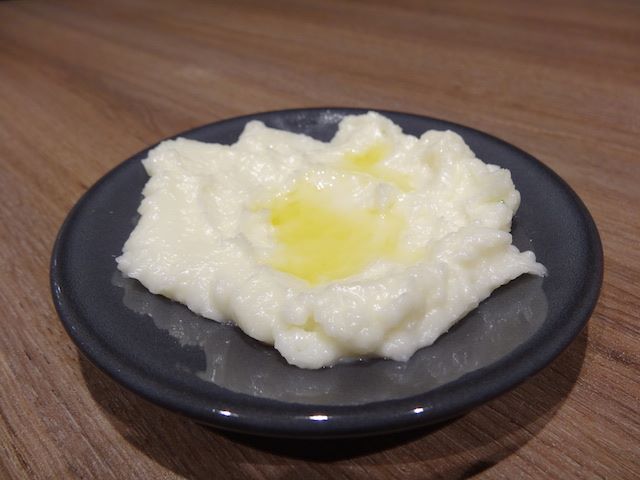 We were then presented with a mixed platter consisting of (from right to left in the picture above) Turkish sausage, marinated yiros meat, sambousik (cheese and meat), falafel and kibbeh. This was an outstanding platter!

We thoroughly enjoyed everything on this plate. The Turkish sausage was juicy and I could taste lots of cumin which I love. The yiros meat was delicate and tender with fresh lemon and parsely flavours. The cheese filled sambousik was delicious with a haloumi type textured cheese inside. The meat filled sambousik had a tasty mince meat centre with a nice crunch from the fried pastry outer. The falafel and kibbeh both with dark crusts had flavoursome centres with great spice and paired so well with the hommos.. or what was left of it!

Now the Garlic Dip! Who doesn’t love a garlic dip that lingers with you for days afterwards! Yes this creamy garlic puree was absolutely delicious and paired so well with the following meat skewers but it’s definitely not date material! So dip with caution! For our next course we are served 3 meat skewers (chicken, kefta and lamb), mixed pickles (turnip, chilli, cucumber and olives) and chips. The chips didn’t strike me as very Lebanese after devouring all the previous traditional dishes but boy were they good with a lovely crisp outer and soft but firm inner and a nice sprinkling of chicken salt. The chicken was moist, and the kefta (mince mixed with herbs, spices, parsley and onion) was my favourite due to the moreish spices. We are informed that all the spices used are hand made on site, which makes me salivate even more! The lamb was our least favourite as it had more of a chewy texture, as temperamental lamb can sometimes have. Pickles are my absolute favourite.. this is no secret… so they were all well received.

Even the turnip which is not usually something I like to eat.. but pickled it’s amazing! To end we are served a lovely pot of Lebanese tea which is made from English Breakfast tea, sugar, cinnamon and mint. This was a great digestive to break down all the meat, garlic and Lebanese bread we had over eaten with! But it was all too good to leave behind! For dessert we were served a traditional Lebanese dessert using a sweet cheese and semolina which is then topped with rose and blossom water and pistachio nuts. The desserts are made by the owners mum which adds a homely authentic touch. It’s a hard dessert to describe as the texture is like nothing I’ve really ever had before but I can say we loved it. It is not an overly sweet dessert and the pistachio adds the enjoyable salty crunch with the rose and blossom water giving it a sticky sauce that soaks in and out of the many layers. Overall, we loved Isaac’s Kitchen! The food is home style traditional Lebanese cooking at it’s best.

Yes the location is casual and not somewhere you would go with your new high heels but it’s definitely somewhere you will go leaving satisfied and already planning a return visit.