Nine breweries on the Fleurieu Peninsula

Words and images by Dressed in Copper

Whilst we love a frosty brew, we certainly aren’t the experts. Thankfully our fellow Adelady, Dressed in Copper, was prepared to do the hard research for us!

If you love your beer, then you need to pencil in a visit to the Fleurieu Peninsula ASAP. With 9 breweries within 45 km, it’s the ultimate place for a beer tour or a lazy Sunday session – you have some of the best beers in South Australia right at your fingertips.

Each of these drinking holes have a large range of beers on show, with some offering food, great views and even wine lists for those who are into their vino.

Here’s where you need to visit when you head down South:

Only recently opened in Old Noarlunga, Victors Place is a restored 1870’s stone barn turned brewery, winehouse and kitchen. With views over the Onkaparinga River Gorge and only a stone throw away from McLaren Vale, this eatery is going to be quite the hit. Serving their own beer brewed on site, you’ll expect to see up to 6 taps running from English Bitter to Saison. To match the beers there is some delicious looking bites on the menu, with a strong focus on regional and seasonal produce. One of my all-time favourites, Goodieson’s Brewery is a hit with locals, visitors and families. Expect to see a long line up of beers on show, from Pale Ales to Stouts and everything in between. With a huge beer garden overlooking the vineyards and a large grassed area to kick the footy – it will keep everyone happy. They also make plenty of limited-edition beers and seasonal brews, like Raspberry Wheat Beer and Christmas Ales, so there will always be an excuse to visit to try something new. This unsuspecting brewery sits in a huge shed in the industrial area of Willunga, but don’t let that put you off. This massive space has been converted with plenty of seating, an open woodfire, chesterfield lounges and even a TV to watch the footy. Boasting beers inspired by the Fleurieu coastline, like Porties Pale Ale and a Maslins Red Ale, you’ll find something you’ll love. If you’re feeling peckish then they’ll have you covered with pizzas delivered from Redwood Oven Pizzas and plenty of chips and twisties on hand.

Sitting up the top of the Main Street of Willunga, Shifty Lizard is an awesome new tap house and a welcomed addition to the town. With plenty of their beer running through the taps, you will definitely find one you’ll love – we have found several. Their Stouty Mc Stout Face is my English fiancé’s favourite and I love their Frills Pale Ale. Local pizzas can be delivered for you to devour or dabble in their paninis and kranskys. Hot tip: the meat lovers pizza is the bomb. When I think of Beresford, I think upmarket, aesthetically pleasing interiors and wine. But little did you know it’s actually the tasting point for Vale Ale. Here you can purchase by the glass or try your hands at one of their tasting experiences: it’s the perfect way to sample some of their famous beers before you commit to purchasing.

An awesome range of beers, delicious food and fluffy dogs – are just some of my favourite things. We’ve been here a few times now, and on every occasion, we have been super impressed with the service and the quality of the food and drinks! In particular, we love their 12 Paws Pale Ale and Dark Ale. To soak up the alcohol, they serve everything from onion rings to woodoven Pizzas, grazing plates with local fare and spicy chicken wings. We’ve been here for a hen’s day and they fed us so much we were practically rolling out the door! Forktree have opened their new Carrickalinga digs to the public and everyone has been raving about it, and for good reason too. Expect to see all of their favourites on tap in this renovated shearing shed, as well as a flight if you are keen to try them all. Feeling peckish? Then tuck into one of their burgers or pub style snacks. This place is also a hit with the kids, with plenty of room to burn off energy and tucker for them also.

This is another spot that’s well known for their ridiculously good red wines and exceptional dining experiences. But beer lovers should add this place to their itinerary too – with plenty of fantastic frothies on tap. Expect to see a variety of beers on rotation – we love their Wheat and IPA, and it seems EVERYONE is frothing for their Ginger Beer. Those who are from the south know this name well – I swear it’s one of the most well guzzled beers on the Fleurieu. Cans of their Golden Ale are a staple in our fridge at home and we are big supporters of these Vale locals. Swell’s new bricks and mortar location is a cracker – perched on Olivers Road, there’s a HUGE grassed area and an even bigger fancy shed where you’ll find plenty of their beers on tap as well as wine and food by chef Todd Steele. Their liquor licence is capped at the moment so be sure to make a booking. 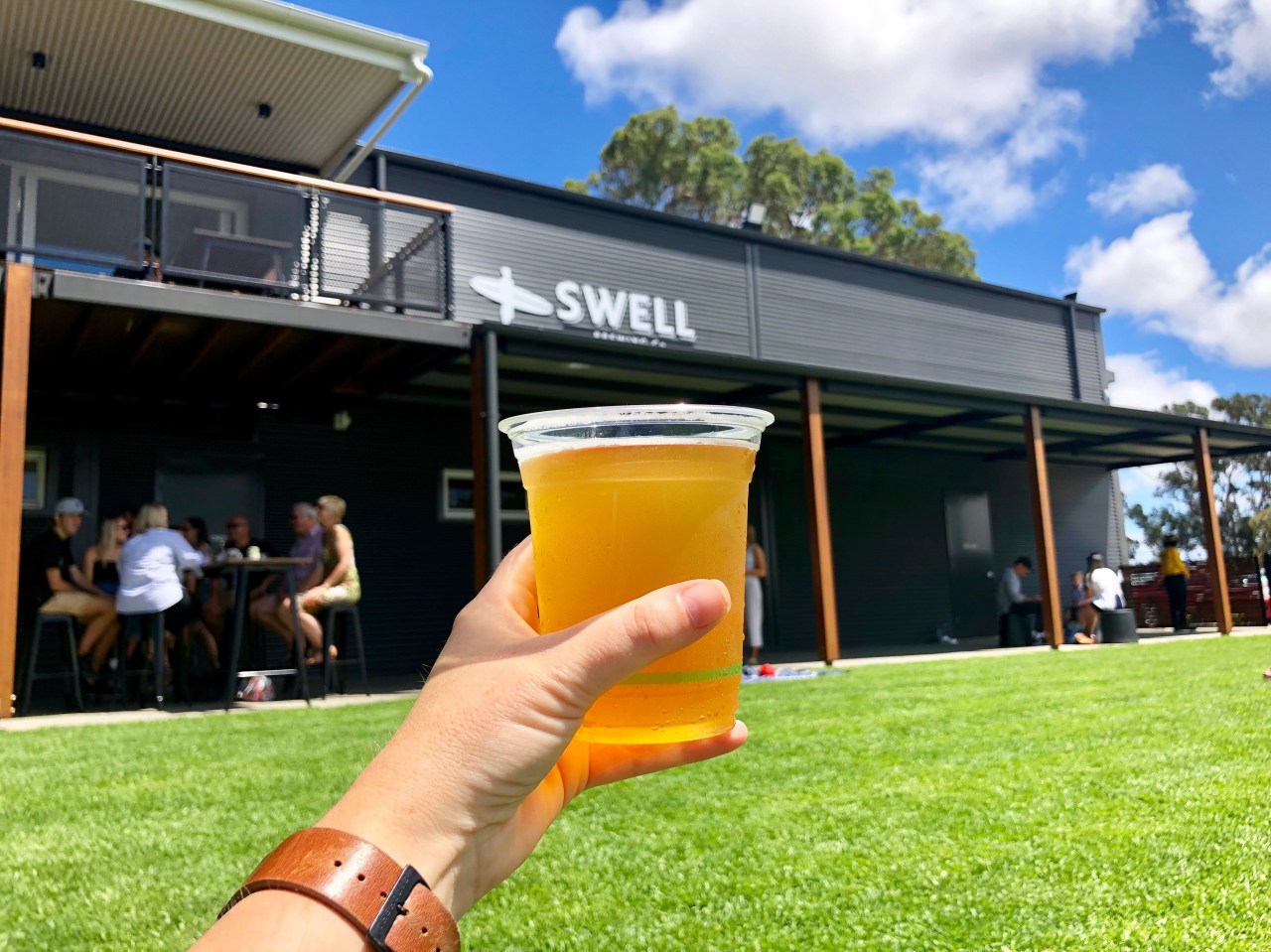