When we heard that the Cellar Door Fest was coming back for it’s 8th year, we just knew that the wine gods had been listening to our prayers. Seriously — we know that we bang on about the amazing wine that SA produces, but that’s just because it’s SO DAMN GOOD!

This year we are supercalifragilisticexpialedocious-ly excited because while the wine is still the centre of attention, there are also some other players in the game — like the beer garden and craft distilleries.

And as we’ve been not-so-patiently waiting for the weekend of the 2nd of March to roll around, we now know a LOT about Cellar Door Fest. So, why not put that knowledge to good use and tell you why you should not only WANT to, but why you NEED to come along to Cellar Door Fest. We’re guaranteed to be there for most of the weekend!

1. Our #1 rule in life is to support local, so it makes sense that this is also our #1 reason for attending Cellar Door Fest. A room packed with local wine, beer, spirits and food is basically our idea of heaven, so get around it! 2. I swear to you that I’m not exaggerating when I say that there are 180 local wine, beer, spirits and food producers from 17 different SA regions bringing their goods to the Convention Centre. Ummm did someone say “spoilt for choice”?

3. We’re pretty sure Jessie Spiby is our secret soul sister, because she’s created an event called Food, Booze + Dancing Shoes which will be kicking off the Festival as the official after party! It’s basically a collaboration between Jessie Spiby (food queen), Porch Sessions (music gods) and a bunch of great wineries, distilleries and breweries (booze bosses) from McLaren Vale and the Adelaide Hills! Add it to the diaries now kids, 8pm to midnight on the 2nd of March. 4. Now, remind me again what goes perfectly with wine? Oh yes, that would be the FOOD! There are 16 food producers attending the Cellar Door Fest this year which means there will be cheese, chutneys, pastes, olives, pates, terrines, sauces, spices & rubs, traditional small goods & alpaca products, chocolate, toffee and sweet treats for as far as the eye can see. 6. Forget wrestling matches or epic footy finals, we all know the sport of the moment is actually the “Battle of the Brewers”. Sit back and enjoy a long, late lunch while your fave craft brewers (think Mismatch Brewing Co + Pikes Beer Company) fight it out for the top spot in the beer garden.

7. Ever looked down into your G + T and thought to yourself “I wish I had an infinite source of gin”? That’s just me? Well, awkward moment aside, Cellar Door Fest is offering a DIY gin blending class so you can learn the in’s and out’s of the perfect bevvie. 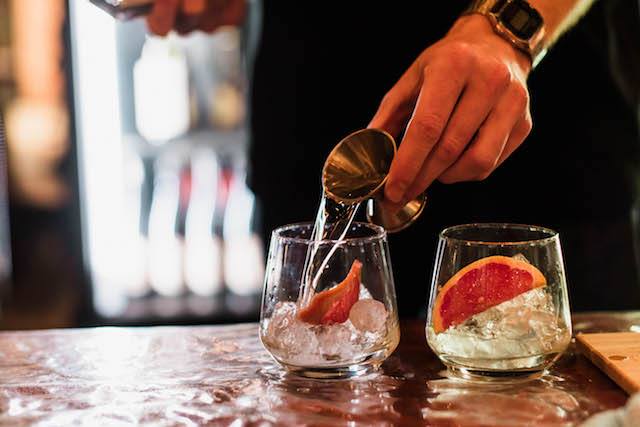 8. We’ve got a real soft spot for the Cellar Door Fest venue this year — the Adelaide Convention Centre! We held our Season 3 launch party there and it was awesome — such a beautiful venue, smack bang in the middle of the CBD and right on the riverbank. Bliss! 9. Wondering how to justify spending your entire weekend at a food + wine festival? Make sure to head to one of the FREE Flavours of the Fest cooking demos so you can put the entire weekend down as “educational”. Plus, who doesn’t want to learn how to make amazing food at home? 10. Our final point can only be described as “party time”! It’s the perfect time of year for everyone to be out and about in the CBD, making it impossible not to feel the good vibes flowing through the city streets. So get out there and make some new friends or catch up with old friends, and enjoy everything that our beautiful state has to offer!