Who doesn’t love being on the ‘in’ – discovering a hot new act before everyone else does… Ross Noble, Carl Barron – even Jerry Seinfeld and Chris Rock started somewhere in smaller theatres with a bunch of people pretty sure they were witnessing something special …

For those who love to be in the know, here’s a bunch of hot new acts to watch at Fringe 2018 (check them out now – before they become more famous and their ticket prices increase!)

ROSE CALLAGHAN – WILL YOU ACCEPT THIS ROSE?

Rose Callaghan delivers dating stories that will make your eyes water and ponders why her life keeps intertwining with the real lives of actual people from the actual TV show The Bachelor.

Described as “one of the best up-and-coming comics Melbourne has to offer”,  Rose debuted her first solo show in 2016 to a run of sold out shows across the country and took out the Best Comedy award at the Sydney Fringe Festival. If you want to feel better about your disastrous love life or laugh at how pathetic single people are, you will love this.  Never been to the Adelaide Fringe before. Wil Anderson & Tom Green spotted Cam’s talent and invited him on their tours so if he’s good enough for them then he’s gotta be hot!  This is so relatable – it’s a killer new hour of pure stand-up about life’s most annoying everyday challenges, & the good & evil voices that guide us through them. And he doesn’t even do it with PMS!!

This is Cam’s 1st time at Adelaide Fringe after last years acclaimed special aired on ABC’s ‘Comedy Next Gen’, appearing on two seasons of Comedy Central’s hilarious web-series ‘Share This’.  Don’t miss this chance to chill out, fire up & laugh with one of your new fave young and hot comedians. Remember when you were made to read Shakespeare at school and you wanted to gouge your eyes out?  It should have been done like this!

This multi-award winning, interactive, cult-hit show has already entertained over 170,000 audience members worldwide from Edinburgh to the USA and London’s West End.  It’s new to Adelaide and is a fab intro for theatregoers to Shakespeare with a wine in one hand and a vodka in the other just the way Old Willy would’ve wanted.

Shit-faced Shakespeare is the hilarious combination of an entirely serious Shakespeare play (Romeo & Juliet) with one entirely Shit-faced actor (they seriously are smashed for real!)  What could possibly go right?

Talk about ability to drop names – this ex lawyer is the real deal!!   Personally selected by Chris Rock to guest on his Total Blackout tour, James is one of only four Australian comedians ever to perform on CONAN and the only Australian ever to be a regular at the Comedy Cellar in NYC. He’s appeared on Flight of the Conchords, Just For Laughs, and Comedy Central and has lunched with Seinfeld. He’s also written for the Roasts of Justin Bieber and Rob Lowe where his jokes were featured in Time and People Magazines.

And top it off, the gorgeous Hollywood star Gerard Butler (and the not so gorgeous ex NYC Mayor Guliani)  both hired James to perform at their private events – as you do! Never been to Adelaide Fringe before.

As seen on ABC’s Comedy NextGen. Perth Fringe World Best Comedy Nom 2015 & 2017!    Artificial Intelligence is coming! It’s going to take over our phones, then our jobs and eventually our lives.

From suggesting shows on Netflix, tailoring news and ads for you and in myriad places you’re not even aware of Artificial Intelligence (AI) is increasingly embedded in our lives.

A growing school of thinkers are demanding that alongside its abilities, we teach it ethics. Can we teach a robot to love humanity? And how hard will that be considering in many ways we still can’t do it ourselves?

Other than that he is young and cute looking, Ben Hart will blow your mind (check YouTube).  Ben is a magician, an illusionist, a West End star, Edinburgh Cabaret Award nominee and he will blow your mind.  Ben, when not doing his own gigs is also part of the show ‘Impossible’ (think the Illusionists).  Check his YouTube clips of him fooling Will i Am and Boy George

Ben’s role as magic designer has seen him create special effects and impossible illusions for theatre, film and television.   He can be found performing his astonishing close-up magic at private parties across the world and has performed for celebrities, royalty and heads of state at just about every kind of event imaginable… but never been to Adelaide before. RED BASTARD – LIE TO ME

Any show where this happens  – well you’ve got us!

Red Bastard’s latest show Lie With Me is a show about love, lust, fear and sexual freedom and how society imposes a strict code that relationships old and new feel bound to follow.   He’s coming to Adelaide to expose the lies we tell our lovers and those bastards who made us lie in the first place.

He’s made a show so embarrassing, so morally depraved – the only reason you would possibly watch it is…it’s a show about you. So, with that said, do you dare see Red Bastard’s  “Lie With Me”?

Is it any wonder that by the end of the show some people want to hug him and some want to punch him. Red Bastard’s sense of humour will take you to the edge of the line – but he won’t cross it – he’ll leave that to you… 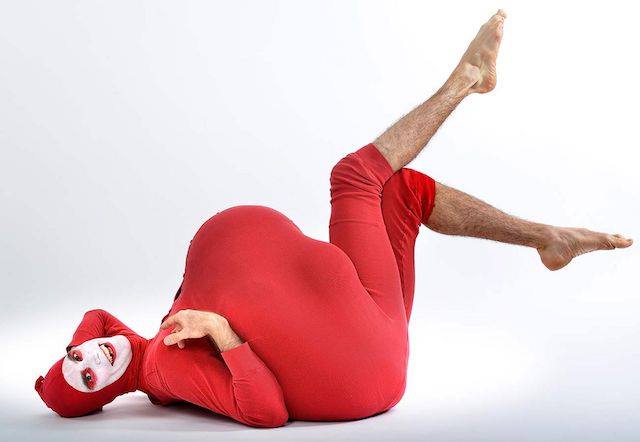 So there you go – 7 shows to check out during the 2018 Adelaide Fringe!